"L" blades are the original form of rotary blades that were used on the first Rotavator machines of their time. They were designed to fit a constant depth across the full width of tillage. The leading edges of the shank and foot where sharpened for easy penetration and the sole of the blade foot was curved inwards from front to rear so that as the blade cut into the soil; it was pulled forward by the motion of the tractor - only the cutting edge of the blade was in contact with the ground. This curvature of the foot and of the blade was, and still is, an important feature of all Howard blades. With no more than the cutting edge in contact with the soil beneath the blade, not only is there no downward pressure to compact the ground below, but the blade itself is self-sharpening.
"L" blades are still the best choice for Shallow cultivations of 2" or less, or in base of the tillage zone needs to be leveled.

“C” blades are the next step in blade innovation. This is a blade which starts with a vertical shank and ends with a horizontal foot but in which the sharp right-angle bend between the shank and foot of the “L” blade is replaced by a gentler curve. The “C” blade takes less power to operate then the “L” and so is well suited to general tillage work carried out at depths greater than 2”. The base of the zone tilled by the “C” blade is scalloped, which makes it less suitable for the shallow cultivation. Maximum depth of the tillage that can be achieved with the “C” blades is 1”-2” greater than the “L” blades and the higher power of the “L” blades will usually man that a machine fitted with them will have to be worked at a slower travel speed than one fitted with “C” blades, working in similar conditions at the same depth. 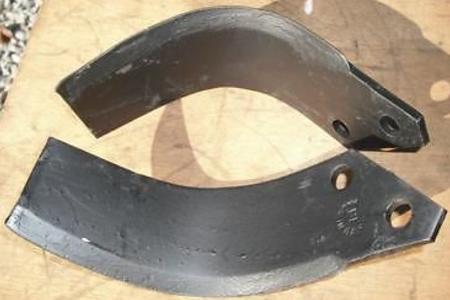 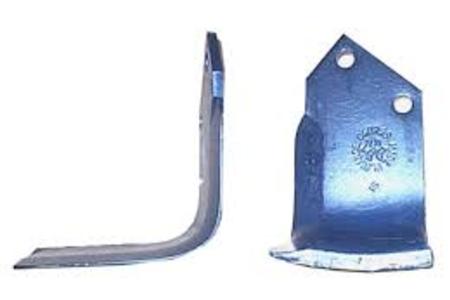